Has the DMV Told You That You Cannot Drive?
Did You Fail the DMV Vision Screening Test?
Has Your California Driver’s License Been Revoked?
You Have Come to the Right Place
Dr. Harold Ashcraft Can Help!

Dr. Harold Ashcraft O.D. and the other IALVS Low Vision Doctors have helped thousands of people drive safely, even when they have failed the California DMV Vision Screening Exam or been told by the DMV they cannot drive.

Not Being Able to Drive in California Can be Devastating

The ability to drive is often taken for granted until that ability is jeopardized. Driving is a source of independence. It allows you to go where you want at your will. It allows you to visit family and friends, to run necessary errands, to participate in hobbies, and to travel. It may be something that you’ve depended on for many years to live your best life.

Losing the privilege to drive can be devastating and depressing. Dr. Ashcraft has helped many patients continue to drive, even when they have failed the screening eye test at the California DMV or been told they cannot drive.

If you’ve been diagnosed with a low vision condition--macular degeneration, Stargardt’s disease, albinism, inoperable cataracts, glaucoma, optic nerve disease, or diabetic retinopathy—bioptic telescope glasses may be an option to help you drive safely.

What Are Bioptic Telescopic Glasses (Bioptics)?

Imagine you are an avid bird-watcher. You are outside in nature and want to view the birds that are perched in a far-off tree. You grab your binoculars, place them in front of your glasses in your line of vision, and look inside. Although the birds are far away, you can see them clearly and in detail because of the binocular’s magnifying properties.

Bioptic telescopic lenses, (also known as bioptics or bioptic telescope glasses) perform in a similar way and can be worn while driving. Bioptics can help you see signs and traffic signals without the need to get very close.

Bioptic telescope glasses look like regular ophthalmic glasses with the addition of miniature telescopes mounted onto one or both of the lenses. The location of the telescopes is very important and is located above your eye level or line of sight. The telescope has a high-powered lens that significantly magnifies images in the distance. When you are looking straight ahead, you are looking through the “carrier” lenses. The main carrier lenses contain your best corrected distance prescription.

How Do Bioptic Telescopic Lenses Work For Driving in California?

Driving safely with low vision presents a number of challenges. A driver has to be able to view road conditions and quickly make decisions to change lanes, speed up, or slow down. A driver must be able to clearly see road signs, traffic lights, and other cars from a distance. This is especially important when driving in a very populated area like Los Angeles County or other large cities in California.

Bioptic glasses work for spotting objects while driving. Most of the time you will be looking straight ahead and seeing through your distance prescriptions lenses. Then, when you need to look at a road sign, traffic light, or something in the distance, you briefly tilt your head downward to look through the telescope. In this sense, looking through the telescopes is similar to looking through a rearview mirror for just a moment.

It is not intended for drivers to look through the telescopes at all times while driving because it limits their scope of view. Over ninety percent of the time, you will not be looking through the bioptic. You will be looking straight ahead through the carrier lens containing your best corrected prescription.

It will take some time and training to learn how to shift between looking through the carrier glasses to the telescopes while driving. Rest assured that hundreds of people have done it and are driving all across California; from Crescent City in the north, though the Greater Sacramento Area continuing on though the San Francisco Bay Area, along the California Central Coast and the San Joaquin Valley, across the Sierra Nevada, through Southern California, and all the way across the desert to the Nevada border.

How Do I Know If Bioptic Lenses Will Help Me?

The first step is to call Dr. Ashcraft to schedule a time for a free telephone consultation. Dr. Ashcraft speaks to all of his low vision patients before appointments are made.

Dr. Ashcraft has seen patients from all over California, as far north as Eureka and Garberville, as well as the Bay Area and coastal areas. He has even seen low vision patients from outside the country. Many patients come to him from all over Los Angeles County, Bakersfield, Santa Barbara, Ventura County, Simi Valley, and the San Fernando Valley.

The second step is to make an appointment for a low vision examination. If you have low vision and vision loss, it is important to find out how much usable vision you have remaining. A low vision evaluation uses special tests to determine visual acuity. Dr. Ashcraft has low vision devices, including bioptic telescope glasses, which you can try out for yourself to see if they work for you. A low vision examination is very thorough and takes about one and a half hours.

Driving With Low Vision in California

If you have vision loss caused by a low vision condition, including age-related macular degeneration, Stargardt disease, diabetic retinopathy, albinism, or glaucoma, you may worry if you can drive. Driving is a source of freedom, opportunity, and independence, and it can be devastating to hear from a doctor or loved one that it is not safe for you to be behind the wheel.

Luckily, living with low vision does not necessarily mean you cannot drive. There is hope. Many individuals with low vision have received their licenses with the help of low vision devices, like bioptic telescope lenses.

Bioptic glasses are a custom eyewear system where miniature telescopes are mounted into the lenses of your normal distance glasses. These glasses are designed so that you can look straight ahead and see using your distance prescription, but when you tilt your head down slightly, you can look into your telescopes to magnify a far away image. The telescopes act like a pair of binoculars.

Bioptic telescope glasses are designed to help individuals see far away objects with greater magnification and clarity. For drivers with low vision, bioptic glasses allow them to see far away road signs, traffic signs, and lights.

Getting a Driver’s License in California with Bioptic Telescope Glasses

Bioptic drivers have been licensed to drive in California since 1971. Low vision individuals may be permitted to drive wearing bioptic telescope glasses if certain requirements are met.

In terms of vision requirements, a person must have one eye with better than 20/200 acuity. An individual must also demonstrate he or she can drive safely by passing the California DMV road test and a written exam. 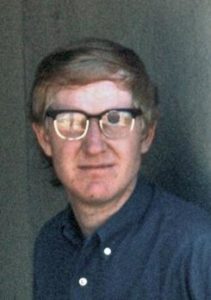 In 1970, Dennis Kelleher was a graduate student at the University of California, Berkeley. He had low vision as a result of albinism and had been told throughout his life that he would never drive.

Dennis connected with Dr. Edwin Mehr, the director of the Low Vision Clinic at UC Berkeley’s School of Optometry. Dr. Mehr asked Dennis what he would most like to be able to do, but was unable to do because of his low vision conditions of Albinism and Nystagmus. Dennis’s greatest desire was to drive.

Dr. Mehr did a low vision evaluation with Dennis. When Dr. Mehr placed a Designs for Vision 3.0X Galilean bioptic telescope into the trial frame, Dennis proceeded to read all but two letters on the 20/30 line of the chart. With the bioptic glasses he was able to see the California DMV screening requirement of vision better than 20/40.

This was a very good sign. At this point in time, no individuals in the state of California were licensed to drive with the use of bioptic glasses, but there were some drivers in Massachusetts and New York who passed the state driving requirements while wearing bioptic telescopic glasses.

After corresponding with the DMV and undergoing the required tests to determine his visual acuity while wearing bioptic lenses, Dennis was given a learner’s permit. He diligently practiced driving under the direction of a driving instructor for a number of weeks.

On March 8, 1971, Dennis Kelleher passed his driving exam after demonstrating that he could drive safely while wearing bioptics. This was the first time a driver with bioptic glasses was licensed in the state of California. This freedom to drive opened up many opportunities to Dennis that may have otherwise been limited. Since 1971, hundreds of individuals with low vision in California have also passed their driving exams with the help of bioptic glasses. 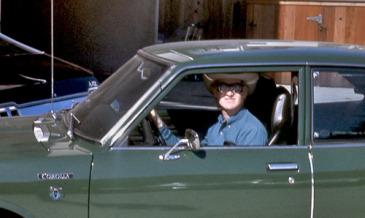 After receiving his California driver’s license, Dennis was hired as a teacher in Yolo County,
a rural area just north of the Greater Sacramento Area, where there was no public transportation. Without a driver’s license, he would not have been able to get and do this job. Later he estimated he had driven an average of approximately 24,000 miles per year for the past 38 ½ years since becoming licensed, for a total of 924,000 miles. This mileage for both employment and pleasure included driving during both daylight and night in urban, suburban, rural, freeway, residential streets and mountain roads settings in sunny, cloudy, rainy, foggy and snowy weather.

Dennis stated: “I believe it is fair to state that I have compiled a superior driving record when compared with the average California driver. I believe this demonstrates that persons can drive safely using a bioptic and do not pose an unreasonably high risk to the general population.”

If you have questions about bioptic driving with low vision in California, give Dr. Ashcraft a call at 800-345-9719. He offers a free, complementary telephone consultation to discuss your personal situation. This number is available 24 hours a day.

Click here for a directory of California “DMV Near You” locations: